The Story of 40 Armenian Orphans, Emperor Haile Selassie I, and the First National Orchestra

Armenians had traded with Ethiopia from as early as the first century AD.[2]

Besides the obvious religious affiliation, there is also the story of the "Arba Lijoch" children coming to Ethiopia after the Armenian genocide. Arba Lijoch were a group of 40 Armenian orphans who had escaped from the atrocities in Ottoman Empire, and were afterwards adopted by Haile Selassie I of Ethiopia, then Crown Prince Ras Tafari. He had met them while visiting the Armenian monastery in Jerusalem. They impressed him so much that he obtained permission from the Armenian Patriarchate of Jerusalem to adopt and bring them to Ethiopia, where he then arranged for them to receive musical instruction.[3]

The Arba Lijoch arrived in Addis Ababa in 1924, and along with their bandleader Kevork Nalbandian became the first official orchestra of the nation. Nalbandian also composed the music for Ethiopia Hoy (words by Yoftehé Negusé), which was the Imperial National Anthem from 1930 to 1974.[4]

Armenians have a much older presence in Ethiopia. Indeed, one of the first recorded diplomatic missions to Europe from Ethiopia was led by Matthew the Armenian who traveled to Portugal and Rome at the request of the Dowager Empress Eleni of Ethiopia to appeal for aid against Islamic incursions into Ethiopia in the 16th Century.

The population peaked in shortly before the Italian invasion in 1935 at around 2,800. By the fall of the Ethiopian monarchy in 1974, it was around 2,000, after which the numbers fell precipitously.[5][6]

in 1924 the ruler of Ethiopia, Haile Selassie, was visiting Jerusalem on a diplomatic trip, and fell in love with a brass band of Armenian children. Upon learning that they were orphans of the Armenian Genocide, he decided to adopt them.

He called this group of 40 Armenians, Arba Lijoch (“forty children” in Amharic, the official language in Ethiopia) and formed the royal imperial brass band of Ethiopia. The group was so successful that it eventually lead to a music renaissance and created a new music genre called Ethio-jazz.

Today, there are about 100 Armenians remaining in Addis Ababa who stay interconnected largely in thanks to the Kevorkoff Armenian school and the St. George Apostolic Church, which continues to operate, thanks to Simon Hagopian, the son of one of the 40 orphans, and Archdeacon Vartkes Nalbandian

by Marie Benedict (Author), Victoria Christopher Murray
Named a Best Book of the Year by NPR! Named a Notable Book of the Year by the Washington Post!“Historical fiction at its best!” A remarkable novel about J. P. Morgan’s personal librarian, Belle da Costa Greene, the Black American woman who was forced to hide her true identity and pass as white in order to leave a lasting legacy that enriched our nation, from New York Times bestselling authors Marie Benedict and Victoria Christopher Murray.In her twenties, Belle da Costa Greene is hired by J. P. Morgan to curate a collection of rare manuscripts, books, and artwork for his newly built Pierpont Morgan Library. Belle becomes a fixture in New York City society and one of the most powerful people in the art and book world, known for her impeccable taste and shrewd negotiating for critical works as she helps create a world-class collection.But Belle has a secret, one she must protect at all costs. She was born not Belle da Costa Greene but Belle Marion Greener. She is the daughter of Richard Greener, the first Black graduate of Harvard and a well-known advocate for equality. Belle’s complexion isn’t dark because of her alleged Portuguese heritage that lets her pass as white—her complexion is dark because she is African American.The Personal Librarian tells the story of an extraordinary woman, famous for her intellect, style, and wit, and shares the lengths she must go to—for the protection of her family and her legacy—to preserve her carefully crafted white identity in the racist world in which she lives.
at January 22, 2023 No comments: 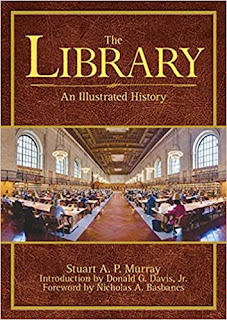 Throughout the history of the world, libraries have been constructed, burned, discovered, raided, and cherished—and the treasures they've housed have evolved from early stone tablets to the mass-produced, bound paper books of our present day. The Library invites you to enter the libraries of ancient Greece, early China, Renaissance England, and modern-day America, and speaks to the book lover in all of us. Incorporating beautiful illustrations, insightful quotations, and many marvelous mysteries of libraries—their books, patrons, and keepers—this book is certain to provide you with a wealth of knowledge and enjoyment. 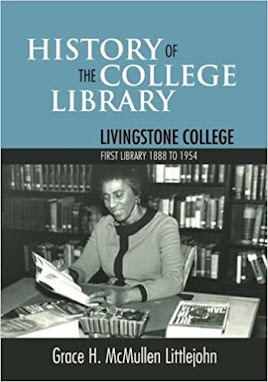 Educators at the Zion Wesley Institute realized early the importance of reading and research in developing thinking people. For this reason they stressed a well-balanced book collection from the very beginning of the establishing of the institution. As years have passed and educators have come and gone, the institution has ripened and reached maturity and so has the library of the college.It is the purpose of this report to picture the growth of the library proper of the college. Excluded from this study is the library of the Hood Theological Seminary located on the second floor of the Carnegie Library building and is now under the direction of Mrs. Mable Graves. The materials included here have come from rare documents located in the college library, personal interviews, North Carolina Library Commission, W.F. Fonvielle’s, Reminiscences of College Days, James S. Brawley’s, The Rowan Story, 1753-1953, Office of Education, Washington, D.C., Official Statistical Reports of Librarian, C.P. Harris, Zion’s Historical Catechism, W.H. Davenport’s, Membership in Zion Methodism, New Standard Encyclopedias, ad clippings from the following publications: Salisbury Evening Post, Salisbury, North Carolina and Star of Zion, Charlotte, North Carolina. However, materials collected from Star of Zion are limited due to the absence of back numbers of the publication

For More Information on our family library click HERE

The Lunar Visitor periodical was first published in 1852 in San Francisco, California by a formerly enslaved preacher, John Jamison (J.J.) Moore of the AME Zion Church (denomination)- church home of Harriet Tubman, the Paul Robeson Family,  Frederick Douglass, Sojourner Truth, and other abolitionists.
In 2019, the Lunar Visitor brand was updated and modernized by the Moore family. In 2022 the family launched Lunar Visitor Radio during Black History via Live365.com. The work of Bishop Moore, Rev. Dr. Isaiah Moore, and their family continues on to modern-day.

When Bishop Moor published the Lunar Visitor in San Francisco in the 1850s, he gave it the mission statement: “To be devoted to the Moral, Intellectual, and Social Improvement of the Colored Race”, Today we just say "the race". It is through this mission that we self-determine to push ourselves and our families forward generationally, thinking 7 generations ahead. Your support of this Digital Publication and Radio Station will help us in the work of rebuilding our family business and allow us to bring you information that will benefit your life and the life of those that you love.

Ancient Abyssinia and the History of the Ethiopian Empire

The Story of 40 Armenian Orphans, Emperor Haile Selassie I, and the First National Orchestra

Armenians had traded with Ethiopia from as early as the first century AD. [2] Besides the obvious religious affiliation, there is also the...